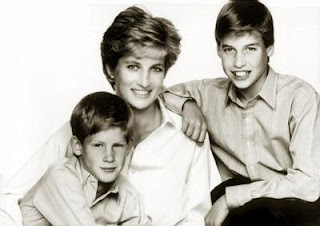 I wrote this in my facebook wall on 18th of May:

I am not a fan of the establishment called Royals as many of you know. However, I still remember the day when Princess Diana died. We were holidaying in a caravan park in Cornwall. I immediately thought about her young boys, sons. Now, I know how difficult sometimes to marrying into a different culture, or race and having mixed race children. Sometimes you get a slack from the both side of the divide. Luckily we live in London, magnificent city with loads of mixed race children and with really easy going, tolerant crowd. Unfortunately sometimes you come across some tribal people coming here from four corners of the world, while enjoying the cultural benefits and tolerance provided by Londoners, still trying to force their tribal rules on us.
So for me, Prince Henry Charles aka Harry from the a leading family in UK has real guts to go for Meghan. Well done man. Good luck to both of you for tomorrow.

Then I got a reply from a friend like this:

Can you clarify what you meant by tribal?. It's quite funny kids with money get so much sympathy from the public not the kids just because they marry women with high level of melanin. It's just these royal idiots are still in the 1800 and they have so much catch up to do . Start it with cutting down British public tax money now that's guts. Mute marrying a girl with higher melanin.

I replied to him:  Because there are people who are still looking at mixed race marriages disapprovingly.

Then my mixed race daughter replied to him this way. I love this reply. So I am posting  it here.

It seemed like some clearing up was warranted and I apologise in advance if some misunderstandings occur, mainly due to the fact that this conversation wasn’t the best example of ideal spelling and grammar.

Firstly, I think ‘tribal’ was supposed to refer to the result of an upbringing and experience in an environment that wasn’t diverse and tolerant for a person of that community to easily learn and be able to reciprocate these values of acceptance, individual liberty and mutual respect to the extent that you and me would expect.

Secondly, there has been a previous point that Meghan’s ethnicity and culture in relation to her marriage into the Royal Family is a symbol of societal progress in terms of the difference between the general attitude to interracial couples in the past and nowadays. You seem to have reduced this point to nothing but Meghan being a ‘girl with higher melanin’. Of course, this is true and I also believe that many racial prejudices and forms of discrimination are absolutely absurd and disgusting due to the fact that we are all just humans with varying amounts of melanin.

However, the problem is that you have used this phrase as a classic example of the ‘straw-man fallacy’ by completely dismissing everything behind what being a ‘girl with higher melanin’ becoming the wife of Prince Harry means in our society. Melanin doesn’t determine who you are as a person, but it is determined by who your parents are, who, in turn, are a significant factor in determining your culture, upbringing, behaviour, etc. Meghan’s melanin level determines how people behave towards her, and if they decide to feel hopeful and enthusiastic about the fact this symbol of British culture – the position of Duchess – is now filled by a woman who happens to have lived her whole life knowing the struggles and jubilations of a biracial person, why not just let them be happy about it?

Thirdly, this wedding may be a ‘mainstream vanity stunt’ but some people like it and they, most importantly, have the freedom to like it. A lot of those people also don’t just forget about other pressing international issues overnight, but they do welcome the idea that as well as terror, devastation and fighting, we must not lose sight of the joys of life that we fight for in the first place and maybe it’s nice to see an event based on love in the news just for one brief moment, instead of one based on pure negativity. Also, the complaints about the ‘£32 million’ spent on the wedding seem rather meagre compared to the expected boost to the UK economy that varies from £500 million to £2 billion as long as we’re not being too specific. I understand your point but I would be considerably more sympathetic to it if the Royal Family didn’t actually benefit our economy in some ways.Just remember, this is just a wedding and the family is just bunch of fancy people.

In the grand scheme of things, it's really not a big deal at the end of the day.
- this was written by a family member with a slightly differing opinion on the subject btw