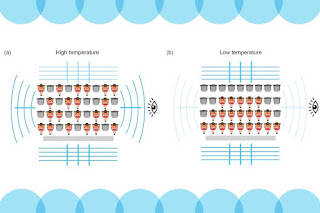 A new study confirms that as atoms are chilled and squeezed to extremes, their ability to scatter light is suppressed.

A new study confirms that as atoms are chilled and squeezed to extremes, their ability to scatter light is suppressed.

An atom’s electrons are arranged in energy shells. Like concertgoers in an arena, each electron occupies a single chair and cannot drop to a lower tier if all its chairs are occupied. This fundamental property of atomic physics is known as the Pauli exclusion principle, and it explains the shell structure of atoms, the diversity of the periodic table of elements, and the stability of the material universe.

Now, MIT physicists have observed the Pauli exclusion principle, or Pauli blocking, in a completely new way: They’ve found that the effect can suppress how a cloud of atoms scatters light.

Normally, when photons of light penetrate a cloud of atoms, the photons and atoms can ping off each other like billiard balls, scattering light in every direction to radiate light, and thus make the cloud visible. However, the MIT team observed that when atoms are supercooled and ultrasqueezed, the Pauli effect kicks in and the particles effectively have less room to scatter light. The photons instead stream through, without being scattered.

MIT Physicists Use Fundamental Atomic Property To Turn Matter Invisible
Posted by Ajith Dharma. at 11/24/2021 12:25:00 am

I encourage you to share your thoughts if they are related to the topic being discussed. I review all the comments being posted. The views expressed in comments reflect those of the author and do not necessarily reflect my opinion.
I want to publish all your comments, but I expect comments generally to be courteous. I will not post comments if they:
contain hate speech directed at any particular race, color, sex, sexual orientation, national origin, ethnicity, age, religion, or disability;
contain obscene, indecent, or profane language;
contain threats or defamatory statements;
promote or endorse services or products of yours. (Non-commercial links that are relevant to the topic or another comment are acceptable for posting.)
Thanks